Although car accidents are common and occur every day, they can still be devastating for anyone affected. In particular, if you are injured during a car crash, how to proceed can be even more confusing. Should you just try to work everything out with your insurance provider, sans any legal aid? Or, is hiring one of the most experienced Arvada car accident lawyers the best option for you?

It can be highly beneficial for the affected party to work alongside an attorney in most car accident cases. A Colorado vehicle crash lawyer will investigate, gather evidence, and provide the court with proof that the other driver was at fault. In many cases, insurance providers will attempt to do the opposite—after all, insurance companies are based around profit, much like any other type of business. 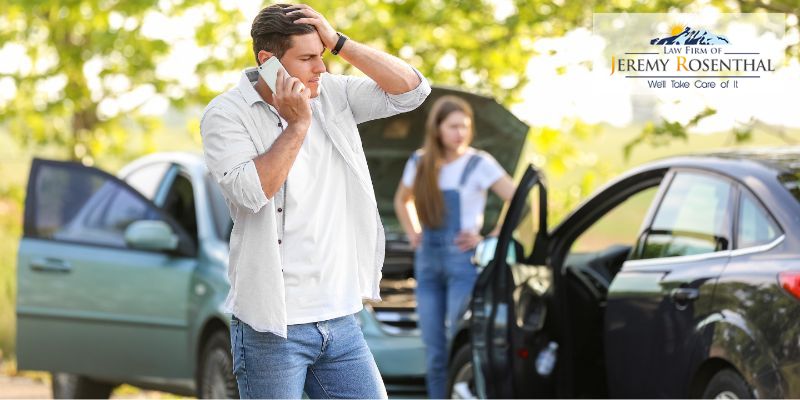 As a result, it is common for insurance providers to attempt to pay individuals the most minor possible settlement after a car crash. This is often unfair compensation and could shift some (or even all) of the blame onto you; your insurance could even attempt to downplay your injuries. Without an attorney to support you and your case, it can be incredibly difficult knowing how to fight this injustice. So, where should you even begin?

If you are in the Arvada, Colorado, area and are looking for fair compensation after a car crash, you can always turn to the Law Firm of Jeremy Rosenthal. Our office dedicates itself to earning each of our clients the fairest possible settlement. We hope to decrease the stress you’re probably already experiencing rather than add to it. A car accident-related injury is difficult enough.

Do I Need an Arvada Car Accident Attorney?

The truth is that a skilled car accident attorney can make all the difference in your personal injury case. A car accident can be devastating and life-changing, although the situation is far more manageable whenever you receive a fair settlement. This settlement should fully cover the cost of your medical expenses caused by the accident, as well as any pain and suffering you may have faced. Car accidents can be highly traumatic, which can take a significant toll on your quality of life, so you should be fairly compensated for it. Other expenses (such as lost wages) should also be covered in your settlement.

If you opt not to work with a lawyer, it is far less likely that you will receive the settlement you deserve. This is especially relevant when it comes to non-material damages, such as pain and suffering. Damages such as these can be difficult to negotiate without an experienced car accident attorney at your side who is familiar with the ins and outs of personal injury cases.

Additionally, you may have lost a loved one to a preventable car accident. It is equally important to work with an attorney in a wrongful death claim to receive a settlement that quells some of the emotional and financial distress.

At the Law Firm of Jeremy Rosenthal, we have a highly developed understanding of the Colorado court and how to best approach personal injury claims. Whenever a client works with us, we will fight tirelessly to ensure that they receive the settlement they rightfully deserve.

As you likely already know, car crashes come in a wide variety of forms. The leading causes of Colorado car accidents are:

What Should I Do After a Car Accident?

As soon as a car accident occurs, every minute counts when ensuring the fairest possible compensation.

Although the moments immediately following a car crash can be distressing, it’s essential to remain grounded to the best of your ability. Certain impulsive, heat-of-the-moment decisions can end up taking a significant toll on your ability to receive an adequate settlement. For instance, never leave the scene of the crash, whether you were at fault or not. Likewise, do not attempt to transport yourself to the hospital; wait for emergency services to arrive, if necessary.

If at all possible, try to move your vehicle to a safe spot outside the travel lanes. Of course, this isn’t always an option. If you are unable to safely move your vehicle, step outside and move off of the road. Do not remain on the roadway.

For the smoothest possible settlement process, consider using your mobile phone to take pictures of the scene. You could photograph your own vehicle, any other cars that were involved in the accident, the current road conditions, any debris, as well as traffic signs and signals. If there is anything else at the scene of the crash that you feel is relevant to proving the other driver’s fault, make sure that you take a picture of that, as well. A car accident lawyer will then be able to use these photographs as evidence in court.

Immediately following a car crash, also be sure to:

Damages During a Car Accident Claim in Colorado

If you’ve begun the process of a car accident claim (working alongside experienced Arvada personal injury attorneys), then it is vital to understand the potential damages you could receive. Further, no two car crashes are identical, so no two victims will receive the same damages. Fortunately, damages come in a variety of forms to cover all possible expenses you could face due to a car accident.

There are two primary categories of damages; they are:

This includes any material expenses you may have faced as a result of the car accident. For instance, common economic damages will include medical expenses (both past and ongoing, if relevant), loss of income (including projected loss of income), as well as any costs related to a physical disfigurement or impairment that you may have received due to the accident.

This category covers less-tangible damages; as such, they are typically more challenging to argue for if you don’t already have a familiarity with the court system. Non-economic damages cannot simply be proven by showing your medical bills. Instead, non-economic damages often relate to pain and suffering, which describes an overall loss of quality of life due to a car accident. This could include the physical pain you experienced, as well as any emotional trauma. The existence of a permanent physical impairment could also earn someone non-economic damages, outside simply the objective cost of their medical bills. If you lose a loved one in a preventable car accident, you can also claim loss of companionship damages.

The Importance of Proving Fault After a Colorado Car Accident

Now that we have covered the damages you could receive following a car crash in Colorado, you may be wondering how you can go about receiving those damages—aside from simply hiring an attorney, of course.

To receive any damages, you and your attorney will need to prove fault. This means that you will have to prove to a judge that the other driver involved in the crash was at fault due to their own negligence.

When an individual drives negligently, they are failing to uphold a duty of care on the road. For example, if someone is willfully disobeying traffic signs, they most certainly neglect a duty of care. If you and your attorney succeed at proving negligence on the other driver’s part, then that other driver will be determined to be at fault. Thus, you’ll receive the damages that you rightfully deserve. 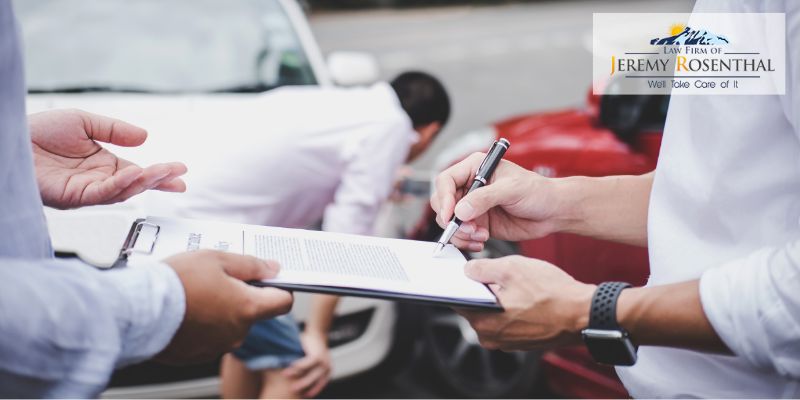 The more at fault you are determined to be, the fewer damages you will be eligible to collect. To receive the best possible settlement, you will need to prove that you had as little fault in the accident as possible.

More specifically, Colorado is considered to be a modified comparative negligence state. This means that if a party is determined to have been over 50% at fault for the accident, they are no longer eligible to collect damages. Not all states use this system. Some other U.S. states utilize pure comparative negligence, meaning that there is no cut-off where a party is too at fault to collect damages. In the example used above, only the individual who was 30% at fault would be receiving damages in Colorado; however, they would be receiving fewer damages than if they were deemed just 10% at fault.

How Much Do You Receive in a Car Accident Claim?

Naturally, this is highly dependent on the specific circumstances of your accident, including how fault is divided between the parties. For instance, if a driver suffers catastrophic injuries due to another driver’s negligence, they will likely receive a larger settlement than someone who suffered only a broken leg. But, of course, the severity of the injuries sustained isn’t the only factor that must be accounted for when determining a settlement.

To get a rough idea of what your total settlement payout could look like, try this: Take your total in economic damages (all the tangible costs you’ve been faced with), and then multiply it by 1.5; this will be a lower estimate of your total settlement. Next, take that same total in economic damages and multiply it by 4; this will be an upper estimate. So, your total damages will likely fall somewhere between those two numbers—but this isn’t a guarantee.

When you work with a car accident lawyer, a higher settlement payout will be far more attainable.

If you have recently suffered a car accident due to another driver’s negligence, time is of the essence. Unfortunately, this sense of stress and urgency can lead individuals to select less than adequate attorneys, leading to lower settlements. Don’t just choose any car crash attorney to aid you in your car accident claim. At the Law Firm of Jeremy Rosenthal, we understand all the intricacies of a personal injury claim, particularly when it comes to vehicular crashes. When you work alongside us throughout your car crash claim, you are far more likely to receive a fair settlement. After all, at our firm, the goal will always be to earn our clients the compensation that they rightfully deserve.

Interested in getting started? If that’s the case, simply schedule a consultation with the Law Firm of Jeremy Rosenthal through the form on our site.