Much of the time, serious vehicular accidents leave a devastating impression on those that they affect. Even when the injury you sustained was minor, the aftermath of the crash can be filled with stress and confusion.

That being said, motorcycle accidents are a unique breed. While it is certainly possible to leave a car accident without having sustained any significant injuries, this generally isn’t the case for motorcycle crashes. More often than not, motorcycle riders will be at the very least seriously injured if they’re involved in an accident with another vehicle. Sadly, motorcycles simply don’t afford riders the same level of protection as a car. Even if a rider takes all the proper safety precautions and wears a helmet, serious injury or death can still occur in the event of an accident. 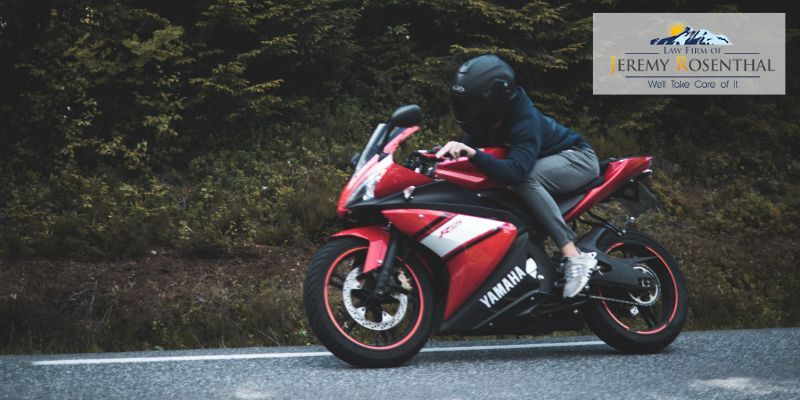 If you or a loved one was seriously injured or killed in a motorcycle accident, then you deserve adequate compensation. To begin healing, both financially and emotionally, it is important that you receive a fair settlement, easing some of the burden you have suffered.

To receive that fair settlement, you must work under the guidance of an experienced motorcycle crash attorney. If you’re in the Arvada, Colorado area, then you can always turn to the Law Firm of Jeremy Rosenthal after a motorcycle accident. We’ll fight to get you the compensation you deserve.

Why Is a Car so Much Safer Than a Motorcycle?

It is considerably more likely for someone to experience a fatal motorcycle accident than a fatal car accident. For perspective, for every 100,000 cars in the United States, there will be a total of 13 fatal crashes.

However, this number grows much higher whenever we’re discussing motorcycle crash outcomes. For every 100,000 motorcycles in the United States, there will be a whopping 72 fatal crashes. As evidenced by this statistic, the injuries sustained during motorcycle accidents are typically more severe than those sustained during a car accident.

Further, according to the National Highway Traffic Safety Administration (NHTSA), motorcycle riders are 35 times more likely to experience a fatal accident when compared to those driving cars.

There are several reasons that riding in a car is safer than riding on a motorcycle. Perhaps most obviously, those in cars are provided far more protection in the event of a crash. At the very least, they will have the body of their car to help protect them, to some degree. In addition, both the driver and passengers of a car are surrounded by their vehicle.

Nonetheless, that is not the case for motorcycle drivers. Unlike people traveling in cars, motorcycle riders have nothing to shield them from the crash. Thus, while a car provides some level of inherent protection to its occupants, motorcycle drivers are not afforded this benefit.

Additionally, due to this lack of protection, motorcycle drivers are far more likely to be thrown from their vehicles in the event of a crash.

Motorcycles are also quite a bit smaller than cars when it comes to size. This makes them easier for drivers to miss, especially if the individual in the car is already driving negligently. If a car driver isn’t paying proper attention to the road and their surroundings, it is entirely possible for them not to see a motorcycle. This can lead to severe and even fatal crashes, where the motorcycle driver suffers the brunt of the injury—all due to another driver failing to afford duty of care on the road.

What Is Typically the Cause of Death in Fatal Motorcycle Crashes?

When an individual is killed during a motorcycle crash, it is most likely that their cause of death was head trauma. Fatal head trauma can come in various forms, including severe concussions, skull trauma, fractures, hemorrhage, and other injuries.

A helmet can stabilize the head and skull of the rider, which can help mitigate injury. However, always remember that a person’s brain is suspended within their skull and cannot be stabilized with a helmet. A helmet can indeed absorb the bulk of the impact, providing the brain with a level of protection. Still, a helmet doesn’t make head trauma an impossibility.

Does this mean you should stop wearing a helmet while riding a motorcycle? Absolutely not. Helmets are still highly effective at preventing more serious or even fatal injuries. However, if someone experiences head trauma following a motorcycle crash, it doesn’t mean that they were being an irresponsible rider. Sadly, this outcome cannot always be avoided.

Those involved in motorcycle accident claims can face certain difficulties, which are unique to motorcycle drivers. Here are just a few examples of some of those challenges, which car drivers don’t have to worry about in court.

Proving Fault After a Motorcycle Accident

As with any accident on the road, you will need to prove that the other driver was at fault to receive the compensation you’re owed. Unfortunately, much of the time during motorcycle crashes, it will be the individual in the larger vehicle that causes the accident. This is sometimes due to negligence, where the driver doesn’t pay proper attention to their surroundings on the road, leading them not to see a motorcycle.

Determining fault is a vital aspect of determining damages during a motorcycle crash claim. Further, how fault is determined is often dependent on the relevant state laws. This is certainly true for the state of Colorado.

Colorado is known as an at-fault state. So long as you are injured or receive property damage during a crash, you have the right to request compensation from the other party. These injuries do not have to be serious, although they often are in the case of motorcycle accidents. Once the situation is brought to court, you will need to prove that the other driver was a fault for the accident. If you and your motorcycle accident attorney can prove this to a judge, you will receive the damages you deserve.

If you can prove that the other party was driving negligently, you will succeed at proving fault. Negligence is at the core of the matter and can come in various forms, from distracted driving to driving under the influence of drugs or alcohol, and so on.

There are two primary categories when it comes to damage: economic and non-economic damages. These terms are relatively straightforward.

Economic damages are tangible and often relate to factors such as medical expenses (both past and projected), damage to your motorcycle, lost income, or lost career potential, and so on. If the cost can be demonstrated with a bill or another objective method, then it will be considered a form of economic damage. 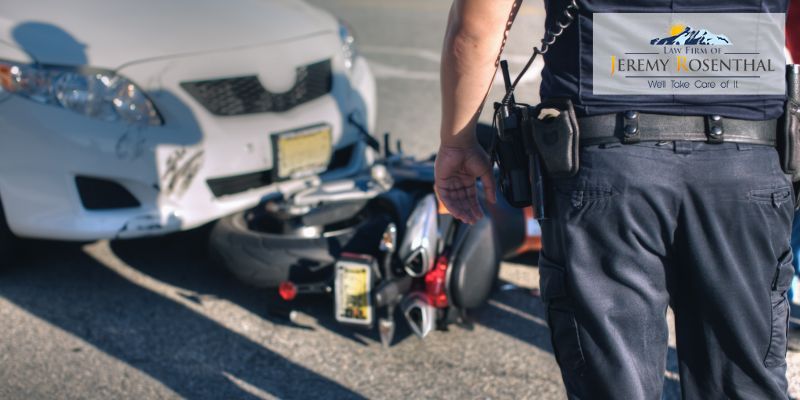 After experiencing a motorcycle crash in the Arvada, CO area, it is essential that you work alongside an experienced motorcycle accident lawyer. Personal injury claims are complex, and if you are unsure how to navigate the situation in court, you could be losing out on the settlement you rightfully deserve.

As we have demonstrated, motorcycle crashes come with a series of unique complications, even compared to other forms of vehicular accidents. Without knowledge of personal injury court and all that it entails, it’s easy for an individual to become lost and confused by the process. Don’t put yourself into this position. Instead, take the actions necessary to receive a fair settlement.

The dedicated motorcycle accident attorneys at the Law Firm of Jeremy Rosenthal will work tirelessly to ensure that you receive adequate compensation. Interested in scheduling a consultation? Simply contact our office through the form on our website.