How Can Road Rage Influence Your Claim? 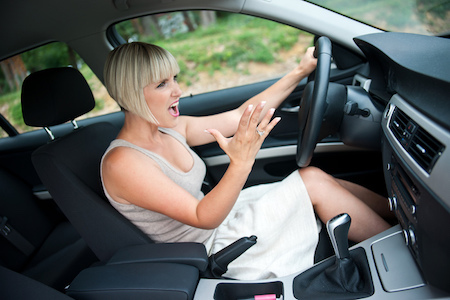 Sharing the road with other motorists is not always easy. Every day, thousands of drivers in Colorado make mistakes behind the wheel that are bound to irritate and annoy us. For many, the worst way in which these situations end is with an exchange of some, shall we say, “sign language.”

However, this is not always the case. Sometimes, drivers on the road completely lose their cool and engage in risky and dangerous behavior. This is what we call road rage. Intentionally stalking and following too close behind a vehicle (tailgating), cutting drivers off, and swerving in and out of lanes while screaming out the window are all examples of road rage.

Not only is this behavior scary, it’s a recipe for a collision. And what’s worse, is that if you are injured by a raging driver, you may not be able to recover damages – at least not from the other driver’s insurance company.

Included in most, if not all car insurance policies, is language stating that the insurer is not responsible for covering damages in an accident caused by the driver’s intentional conduct. And, you guessed it, road rage is (and should be) considered intentional activity. This is because the driver intentionally and actively seeks to cause the other driver(s) emotional and physical harm.

Compare this to accidents caused by drunk drivers. Drunk driving is not usually considered intentional conduct. Although the driver intended (and did) drink and at some point, intended (and did) drive thereafter, they likely did not intend to cause your car accident and resulting injuries. Their conduct was reckless, not intentional. Therefore, insurance companies will typically cover damages resulting from a collision caused by an insured drunk driver.

So, what can you do if you’ve been injured in a car crash where a road-raging driver was at fault? Basically, you can file a personal injury lawsuit against the driver and hope he or she is wealthy or has assets which can be liquidated to cover your damages. Or, you can use your own uninsured motorist coverage (assuming you have it) to compensate you for your losses.

Because insurance companies have the right to deny claims due to their insured’s intentional, road raging conduct, you may want to think twice before telling the police that your accident was caused by the other driver’s road rage.

If you have been injured in an accident caused by another motorist’s road rage, you should always hire a car accident attorney that knows the law in your jurisdiction to handle your case. The experienced Denver personal injury attorneys at the Law Office of Jeremy Rosenthal offer free consultations to all injured people and their families. Our attorneys will evaluate your case, and let you know what your legal options are – whether that means a negotiated settlement or a personal injury lawsuit.